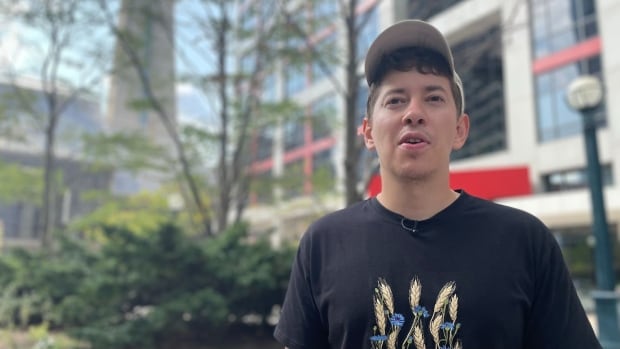 On February 25, a day after Russia launched a full-scale attack on their home country, Ukrainian filmmaker Antonio Lukich and his team rushed into Kyiv.

The team had completed filming Luckich’s second feature film, Luxemburg, Luxemburg, and the content was scattered on hard drives in different places in the Ukrainian capital.

“We were literally saving the material,” Lukich said in an interview with CBC News in Toronto.

WATCH | The director calls it a “miracle”, he finished his film while the war was raging:

Antonio Lukich, a Ukrainian filmmaker in Toronto to screen his film Luxembourg, Luxembourg at this year’s TIFF, opens up about the journey of completing his film as Russia invaded his home country.

TIFF took the decision earlier this year to ban all state-sponsored Russian films. As a result, there are no Russian films at the festival — but there are programming dedicated to the presentation of Ukrainian filmmakers.

Luxemburg, Luxemburg follows the story of twin brothers, played by rappers Ramil and Amil Nasirov, who grow up in the shadow of their absent father. When they learn that their father is dying in a Luxembourg hospital, they embark on a road trip from Ukraine to see him.

The film “literally gave us hope”

“It’s an incredible miracle for us that we’ve finished the film and now have the opportunity to show it to an international audience,” Lukich said.

In the days following the start of the war, the post-production of Luxemburg, Luxemburg halted indefinitely as the team went their separate ways. Some joined the fight, while others fled the country.

Like millions of other Ukrainians displaced by war, Lukich also left, taking his wife and three-year-old son to his hometown of Uzhhorod, near the Ukraine-Slovakia border. Eventually they arrived in Slovenia.

About a month later, he returned to Kyiv without his family, determined to complete the film.

“This movie literally gave us hope for life,” Lukich said. “We felt that was our mission…since we’ve been doing it for three years and know the potential of the film.”

A film about absent parents

Luxemburg, Luxemburg was inspired by Lukich’s relationship with his own late father, from whom he was estranged.

“When he passed away, he left a huge void inside me,” the director said. “It was the main fuel [for the film] — to find out who this guy is that created me.”

LISTEN | A Ukrainian director talks about making art in the middle of war:

14:40Ukrainian director Antonio Lukich talks about Luxembourg, Luxembourg and art in the midst of war

Antonio Lukich’s second film Luxembourg, Luxembourg narrowly avoided being lost in the rubble when Russia launched its invasion of Ukraine earlier this year. Today, the Ukrainian director shares his experience of art in the midst of war. He joined guest host Talia Schlanger to discuss the sacrifices he made to bring his film to the international film festival circuit, including a North American premiere at the Toronto International Film Festival.

Lukich’s vision for his feature film crystallized further after the invasion of Ukraine began and he saw thousands of men join the military.

“Now we will face [again] with a huge generation of absent parents, which is really sad.”

That’s why Lukich says he hopes his son won’t remember the day the air raid sirens went off and he hid under the table.

It’s also why he tried to draw attention to the impact of war as he and the cast appeared on the red carpet in Venice earlier this month.

Although there are several Ukraine-focused films at TIFF this year, Lukich is the only Ukrainian director to screen his film while attending the Toronto festival.

“I am privileged,” he said. “Friends and people I know don’t have that ability to appear in such beautiful places.”

Now that the world has seen his film, Lukich hopes to finally bring Luxemburg, Luxemburg to the public at home.