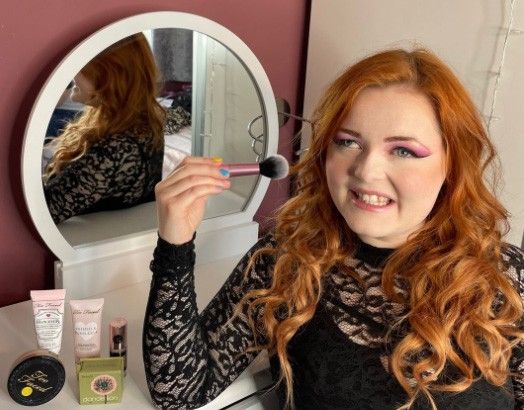 MANILA, Philippines — Applying makeup is a visual task. You often have to face a mirror to figure out where to apply highlighter or when foundation is too cakey, among other makeup concerns.

Two women, however, thwarted the odds when they experienced blindness as teenagers and are now teaching others, including the visually impaired, how to wear makeup. As August is sight month, here are some inspiring stories from blind makeup artists from different parts of the world.

“There should be no limits to beauty. Everyone has the right to sue it, whether you are able to see it or not,” Xiao Jia Told the South China Morning Post.

The 30-year-old is known as the blind makeup artist from China’s Xiangji province.

She was diagnosed with retinal dystrophy when she was 14 and eventually went blind as an adult.

That didn’t stop the teen then. She even went to school for nine years and then went to a school for the blind where she learned massage therapy.

Being a masseuse is the presumed occupation of the visually impaired in her country, but Xiao Jia quit after growing tired of sexual harassment from clients.

At 20, she decided to try her luck in the capital, Beijing, with a blind friend who is now her husband. She held various jobs, including being a stenographer and working for a non-governmental organization. In 2015, she learned makeup techniques and a year later started her own business providing makeup lessons for other visually impaired women.

“Makeup doesn’t necessarily change a person, but by learning how to apply it, they can gain the momentum and the power to feel better about themselves. That’s what makes the difference – they push the boundaries,” Xiao Ji remarked.

She added in a interview with Baidu, “Blind people don’t just have a masseuse job, blind people can learn a lot of things. You can learn ice skating, matching clothes, makeup… As long as you want, the world is as big as you want it to be.”

Edwards’ TikTok video of how a blind girl wears makeup has gone viral with 19 million views.

“Doing makeup is usually a very visual task, but that’s not for me anymore,” Edwards can be heard saying.

“I first knew I was losing my sight at age 8 during a routine eye check. At age 11, after several visits to the doctor, my retina actually detached from my right eye. And then at 17, in the middle of my A levels, I lost my other eye, which left me completely blind,” Edwards explained while on the Truly YouTube channel.

In addition to sharing how to look glamorous for a night out or a tanned summer look, Edwards also creates helpful videos and short films for visually impaired colleagues and the general public.

She has her “Blind Hacks for Guide Dogs” and “How does a Blind Girl Does” series.

“I took back control of how I looked. I failed and got back up. Never let anyone tell you you can’t do something. Live life for yourself,” she said.

RELATED: Philippine National School for the Blind: A Virtual Tour

8 Video Game Characters Who Use Poison