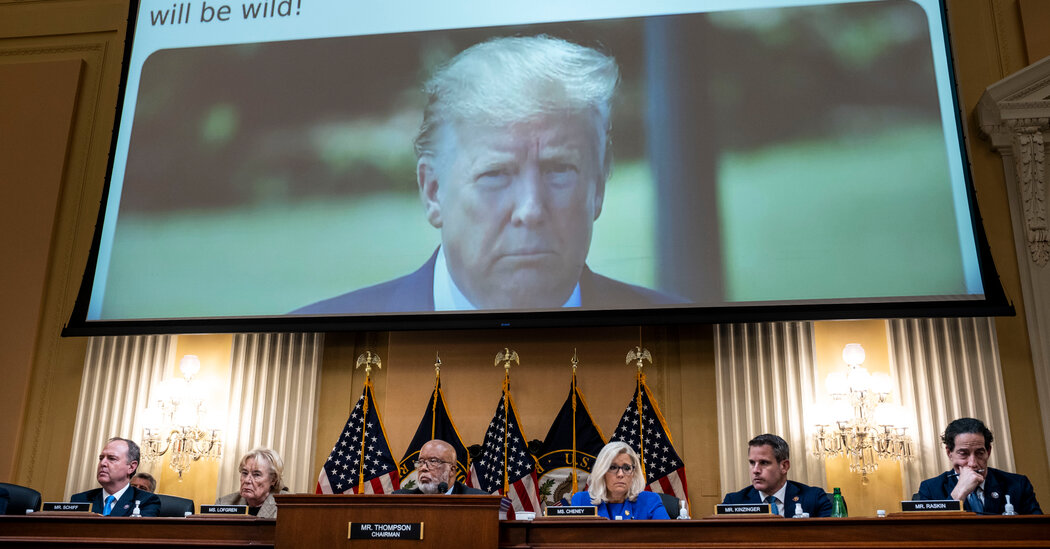 The first night of the Jan. 6 congressional hearings was no fun. It was a deadly serious reality, providing a terrifying panorama and close-up of a veritable nightmare: the attempt, through violence, to effectively end American democracy by overthrowing the will of the voters and maintaining the President Donald J. Trump installed in an office which he lost.

But the hearings were also televised, struggling for attention in a cacophonous media environment. It’s not just me speaking as a TV critic. The committee itself recognized this by bringing in James Goldston, former president and producer of ABC News, to shape the show and airing it, exceptionally, in prime time.

It wasn’t just a dutiful time capsule for historical records. It was television destined to break through and to matter, now.

What we saw in this first episode was impressive: a well-crafted, passionate and disciplined first part of two hours. This made the committee’s case in miniature, that the attack on the Capitol was not a spontaneous explosion but rather the “climax of an attempted coup,” in the words of the committee’s chairman, Rep. Bennie Thompson, Democrat of Mississippi. And it promised, tantalizingly, to flesh out the larger plot with fine detail and an expansive cast.

The proceedings had familiar features, including live testimony and opening remarks from Mr. Thompson and Vice President Rep. Liz Cheney, Republican of Wyoming. But it was billed as a prime-time special, the live elements seamlessly interspersed with taped interview snippets, timestamps and graphics.

Even more striking, however, was the show’s structure, which was reminiscent of 2022’s most ubiquitous TV format: the true-crime and true-scandal limited series.

Like “Under the Banner of Heaven,” “Candy,” and other similar headline-grabbing dramas, it introduced the climactic violent act in its premiere episode—the Jan. 6, 2021, attack on the Capitol—at a point – out-of-sight editing that made the viewer the target of the crowd’s blows and curses. Then he promised to go back in the timeline and delve into the larger conditions and machinations behind the crimes.

It had both an episodic structure and a serial arc. Ms Cheney explained how each installment would focus on one element of Mr Trump’s “seven-point plan”. But the presentation also placed those parties in a broader context, showing that Mr. Trump was told by his closest advisers that he had lost, plotted to reject the election anyway and summoned supporters, including organized and violent groups, for a “wild” day in Washington.

Then the muscle materialized, under the banner of Trump.

Compact in length by congressional standards, the hearing presented a universe of characters, relationships and antagonists: the president’s advisers, including former attorney general William P. Barr, who used language “absurd” and louder to dismiss allegations of electoral fraud; Mr. Trump’s fury at his Vice President, Mike Pence, which the committee said led the former president to say members of the mob threatening to hang Mr. Pence might “have the right idea”; and groups supporting Trump, including the Proud Boys, described as carrying out a coordinated strike, not a spontaneous explosion.

The curtain-raiser has been brutal to watch at times, especially the testimony of Caroline Edwards, a Capitol policewoman injured Jan. 6, who described “slipping in people’s blood” as she and her outnumbered comrades faced hours of hand-to-hand combat. . Perhaps most haunting was seeing Ms. Edwards’ low-voiced video of her own assault.

The testimony moved across the battle line with documentarian Nick Quested, who had been embedded with the Proud Boys before and during the attack. His contribution was not just more shocking images, but a thesis: that the group had organized and begun its move to the Capitol even before Mr. Trump spoke at his Jan. 6 rally — a counter-narrative to the idea that the siege was simply a protest that was out of control.

I know some readers are offended by the mere use of “narrative” or “story” to describe crucial information about an attack on democracy. But these are not insults; Story structure isn’t just for Marvel movies. Storytelling is what gives a deluge of information shape and pattern. Storytelling is a tool for engagement, not just distraction.

The committee clearly knows that. As Jake Tapper noted on CNN ahead of the hearing, there was no need to televise these sessions at all. He could have simply published a report. But as TV has proven, not everyone wants the 800-page paperback when they can opt for the compelling multi-part adaptation. (At least 20 million people watched the hearing, according to Nielsen’s notes.)

And if you want to know the power of applying the lessons of entertainment television to politics, watch Fox News, which didn’t air the hearings but spent the evening actively attacking them. Former talk show producer Roger Ailes built Fox in part on showbiz production values, provocation and emotional appeal. The channel’s current star, pro-authoritarian Tucker Carlson, told his sizable audience that the bloody assault on the center of government was “forgettably minor”.

Audiences on January 6 must live in this context of infotainment and grandstanding, whether we like it or not. And the premiere episode was savvy not just about the larger TV audience, but also a smaller one — the news media — and what it takes to maximize coverage.

Nothing attracts news like novelty; a brief scoop, freshly exposed, will often prevail over a shameless conspiracy freely confessed from a presidential rostrum or by tweet. Thus, the committee repeatedly referred to a “never seen” video, a descriptor that has been repeated time and time again in television coverage.

The program offered excerpts of testimonials in bold – including that of Ivanka Trump, undermining her father’s claims by saying she accepted Mr Barr’s assessment – ​​which gave reporters plenty of information to write up and to tweet. Even the runtime, at just under two hours, left time for recap and analysis ahead of the broadcast networks’ 10 p.m. block.

There was, however, one key difference between this production and a TV crime drama. The hearings left no mystery about their theory of the affair, and they indulged in no coyness about whodunnit (in the committee’s judgment), how and why.

A final distinction, and perhaps the most important: it was, for once, a true detective series made in the urgent hope that there would be no sequel.

Taika Waititi gives an update on his next Star Wars film