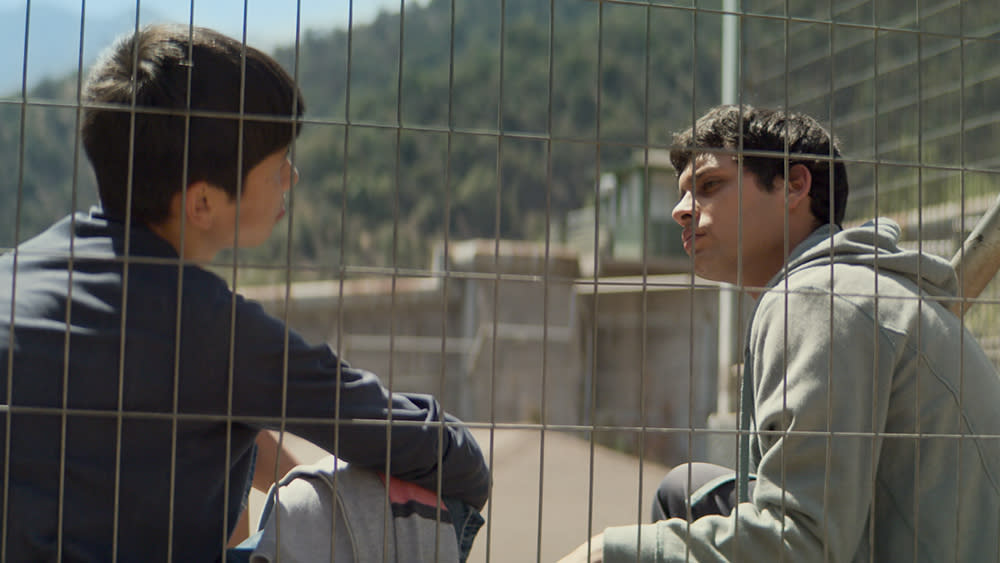 Two boys sit on a hill at the edge of a forest, under a massive stone wall towering above them. Dreaming, laughing, joking, like any other teenager. The threatening sound of a doorbell suggests their happiness, and we begin to understand: the protagonists of the film live within the walls of a juvenile detention center. It is “Mis hermanos sueñan despiertos” (My brothers dream awake), the new film by Chilean Mapuche filmmaker Claudia Huaiquimilla, which premiered in the Cineasti del Presente competition at the 74th Locarno Film Festival.

Huaiquimilla’s second feature film follows the boys Ángel and Franco (non-professional actors Iván Cáceres and César Herrera), two brothers who have been locked up for a year in a National Service for Minors (SENAME) center, awaiting trial. Despite the hostile conditions of the place, they support each other and bond with other boys and girls, share the routine of confinement, try to stay alive while dreaming of the day when they will regain their freedom. The arrival of Jaime (Andrew Basters), a young man transferred from another institution for misconduct, begins to spoil this routine. The rumor that he is planning to escape quickly begins to circulate among the boys.

By telling the story of these adolescents, Huaiquimilla continues the loving portrayal of marginalized children in Chilean society that characterized her other work. The idea for this second film came directly from the experience of presenting “Bad Influence”, his previous effort, to the children who live inside these institutions: “We went to show our previous film in these centers and we met the girls and boys, and it was very shocking because you imagine them to be like ‘residences’ or ‘centers’, but when you are there you realize that they are actually prisons, so it is was a very strong experience. “

At that time, she recalled a case that emerged in her research for the previous film, which involved around 10 children who died in a fire inside a center in Puerto Montt in 2007. “To outside this center there is a memorial. The photographs were all destroyed and it seemed to me that there was no record of the existence of these children. We started to write the script by imagining who they could have been, what they wanted and why they did what they did, why they made such a drastic decision to start a riot and therefore to get in. danger. This is not the biography of what happened but a way of imagining what could have led them to do this.

In an ideal world, childhood and adolescence would be among the most protected periods of life. Yet, as Huaiquimilla shows in “My Brothers Dream Awake”, these young people are completely abandoned and neglected by society. Desperation arouses strong emotions in them, and finally they make a collective decision – the riot – which has irreversible consequences. A lot of tensions unravel around them, lighting fires inside these characters, and indeed the fire itself is a central symbol of the film. “We have seen human beings wanting to live, but they are vulnerable, like candles that go out little by little if we don’t take care of them.”

This film, shot during the Chilean uprising and completed during a global health crisis, strongly resonates with the social demands that are the basis of the ongoing discussions for the drafting of a new constitution in Chile. “For a child to be locked in this place, an education system, a health system and a protection system have failed. Nobody thinks that this is the best solution to keep these children locked up and it is also part of why there is a crisis in our country, a crisis in which there is no child care policy. “

“My Brothers Dream Awake” is not intended to give a realistic description of actual events. Rather, it is about offering an emotional understanding of the lives of these young people. In describing their daily struggles, Huaiquimilla paints a complex picture of their personalities, clearly describing the love and care they show for each other day in and day out. These moments of love, joy and care illuminate a warm and tender side of these young people, who are generally reduced to stereotypical patterns of savagery, aggression and other uncontrolled and uncontrollable behavior.

Huaiquimilla is resolutely dedicated to analyzing the various social problems and institutional dysfunctions painfully affecting the lives of children living on the margins of society. In her next project, “Mapurbe”, she will focus on the stories of young Mapuche women – the indigenous inhabitants of Chile – living in the city and the conflicts they face every day.

The best of variety

Easy FF7 cosplay: the easiest characters to dress up