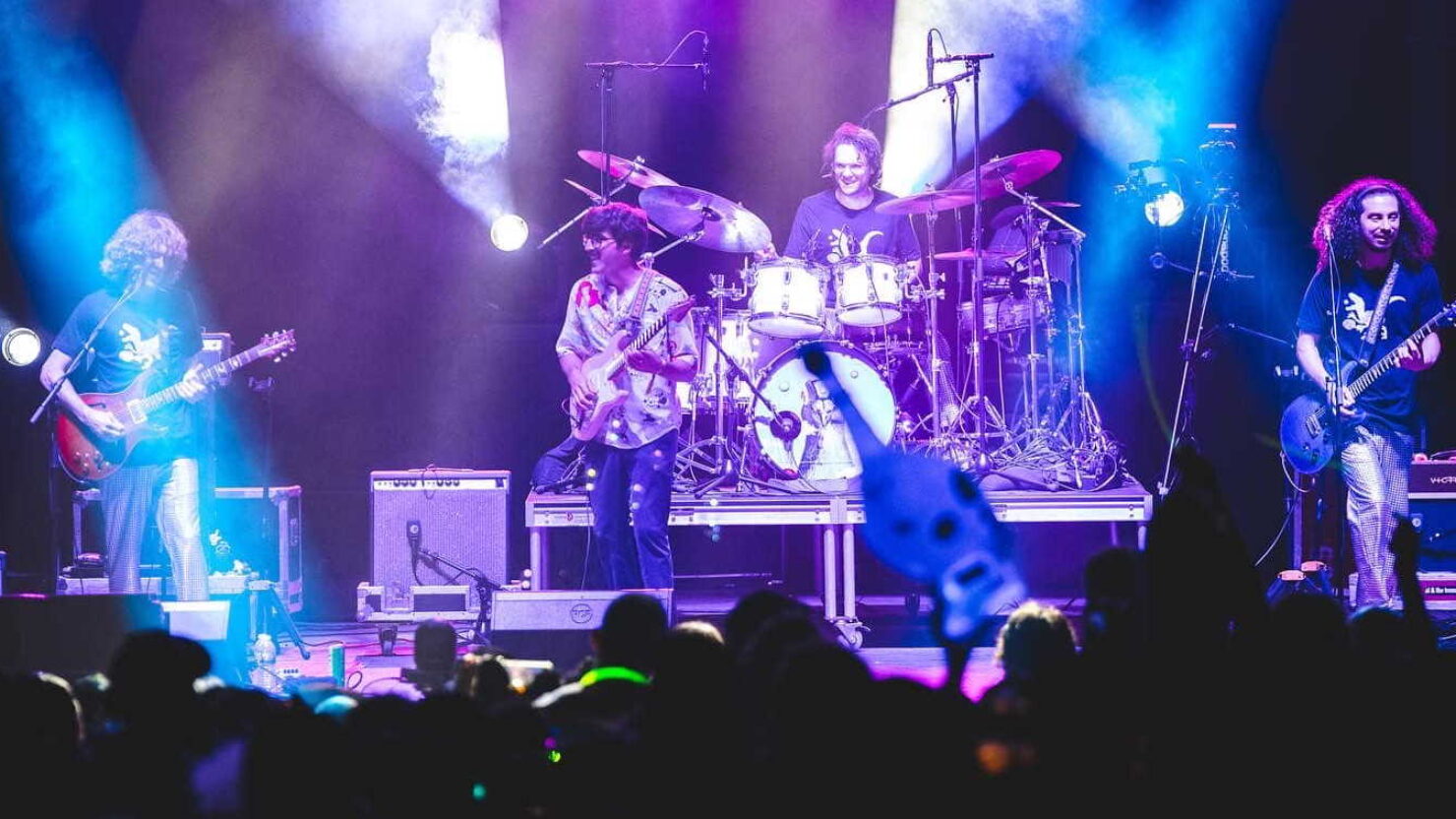 Pigeons Playing Ping Pong hosted and headlined Domefest this past weekend at Legend Valley in Thornville, Ohio. The quartet were joined by a number of special guests during their five sets, including Goose multi-instrumentalist Peter Anspach, Lotus guitarist Tim Palmieri and percussionist Chuck Morris, Dopapod keyboardist Eli Winderman and the Funk You horns.

Thursday’s sets were devoted to “the story of PPPP” with frontman Greg Ormont providing the narration throughout. The night also had an “All Mixed Up” theme as Pigeons performed the recently premiered 311 cover of the same name as the encore. The pigeons kicked off the festivities with a seamless sequence of “Too Long”, “Penguins”, “Funkijam” and “Funk E Zekiel”. Next, “Landing” was integrated into “Funky House”, a mix of Lipps Inc.’s “Funky Town”, Commodores’ “Brick House” and Wild Cherry’s “Play That Funky Music”.

Magic Beans keyboardist Casey Russell was PPPP’s first guest of the weekend, as he added to “Condenser” in Thursday’s second set. Saxophonist LITZ Austin Litz emerged a few songs later for “Water”. Pigeons Playing Ping Pong then released a new original “Fantasy” before the aforementioned “All Mixed Up” finale.

On Friday, Pigeons Playing Ping Pong used the theme “There Goes My Hero” for their regular set and their first late night set at Domefest since 2013. Chuck Morris helped on percussion for “Upfunk” and “Move Like That” after the Opening of “Dawn A New Day”. Next comes “The Town” before Palmieri lights it on a cover of “Fire” by Jimi Hendrix. From there, the quartet incorporated a cover of the Foo Fighters’ “Learn To Fly” into their own “High As Five” and debuted the new original “Beneath The Surface” before a closing “Julia.”

The late night set started with a “Skinner” with the first “Moonwalk” of the year mixed in. “Time To Ride” then wrapped “Kiwi” before “Somethin’ For Ya” turned into a “Skipjack” containing the “Teenage Mutant Ninja Turtles”. Theme song” inside. Eli Winderman emerged near the end of the frame to provide keys on “Su Casa” and a cover of “My Hero” by Foo Fighters.

Pigeons Playing Ping Pong had a long set due to the weather on Saturday instead of the two originally planned. “Disco Dinosaur” was the theme for the night, and the quartet debuted an original of the same name after opening with “Avalanche.” Anspach, who performed at the event with his Great Blue project, played guitar on “Poseidon” and later joined PPPP lead guitarist Jeremy Schon as a guest star with Star Kitchen. Schon too sitting with Spafford for “Leave The Light On” on Saturday.

Watch fan-taken video of Anspach and Schon’s appearance with Star Kitchen below:

A “Hell Yeah” incorporating The Bee Gees’ “You Should Be Dancing” followed Anspach’s appearance. Then “Horizon” and a PPPP “Zydeko” worked on the “Jurassic Park Theme” and vice versa. Then the Funk You Horns added to “Elephante” and stayed for a “FU” which also featured Anspach. “Ocean Flows” closed the last set of the Domefest 2022 quartet.

Again: All Mixed Up

Ensemble: Dawn A New Day, Upfunk*, Move Like That*, The Town, Fire^, High As Five > Learning to Fly > High As Five, Beneath the Surface”, Julia